This article was originally published on BrainFacts.org. 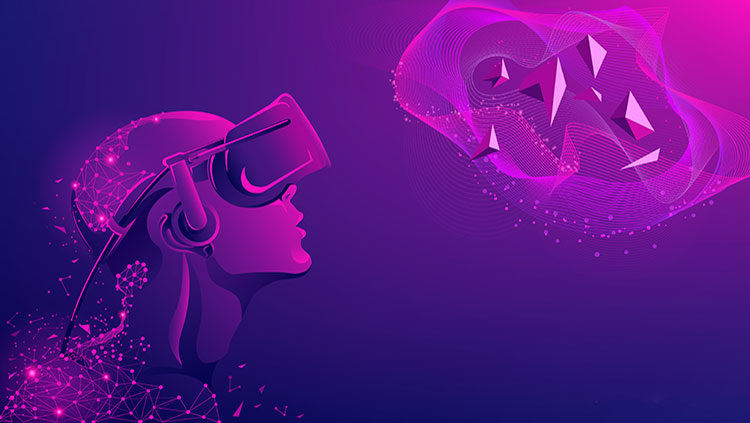 Fay Nugent was on a business trip in the Netherlands when she realized that her fear of heights was taking control. At the airport, she had struggled with getting on the escalator — fear overwhelmed her to the point she could barely step onto it. Until then, she’d avoided things triggering her fear of heights. “But I thought at that point, actually, this is going to cause me problems now because escalators are everywhere,” she said. She knew something had to be done.

A radio ad highlighting a clinical trial trying to treat fear of heights using virtual reality peaked Nugent’s interest. Nugent decided it was worth a shot. The study combined well-established methods of exposure therapy — exposing someone to their fears in a safe environment over and over again until their fear subsides — with virtual reality.

Generally considered the most effective way to treat specific phobias, exposure therapy can be extremely unpleasant — perhaps the reason why relatively few people seek treatment for specific phobias, in spite of experiencing substantial distress. Treating fears in a virtual environment could not only make these therapies less difficult, but also make them more accessible.

“We were noticing that there are long waiting lists for getting access to mental health [care] and that specific phobia treatment was not covered by the health care provider anymore,” says Tara Donker, associate professor and licensed health care psychologist at the Vrije Universiteit Amsterdam and co-developer of the ZeroPhobia app. “And we were like, okay this needs to be changed.” 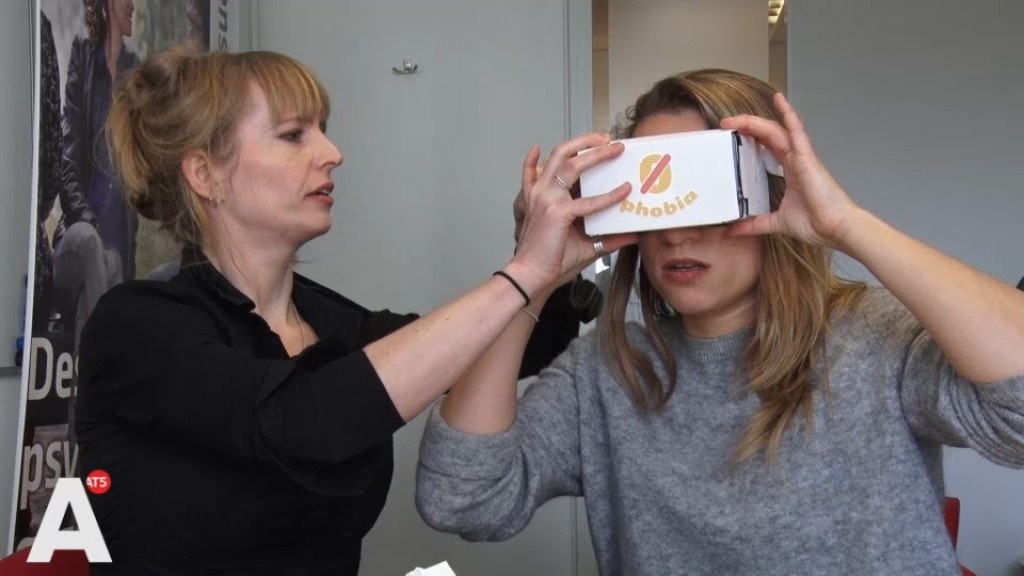 Tara Donker, left, fits a patient with ZeroPhobia’s virtual reality goggles for the treatment of the fear of heights. Donker is completeing research into the effectivenes of ZeroPhobia for the fear of flying.

Donker says one of the reasons she became interested in VR therapy is its potential to increase access to mental healthcare. As VR headsets become common (there are dozens of smartphone-based VR headsets available for less than $50), VR-based treatments could help bring low-cost therapy to greater numbers of people.

Daniel Freeman, a clinical psychologist at the University of Oxford who has worked on the automation of VR therapy, agrees. In-person therapy limits the number of people who can participate in therapy to individuals or small groups. When these treatments are automated and sessions guided by a programmed virtual coach he says, “that means you can get the treatment to many millions more people, because a key barrier in any psychological disorder is getting access to a therapist, a good therapist doing the right thing. So, for me, the potential is in VR you can automate the provision of really powerful psychological therapy and get it to many more people.”

So far, VR therapy has demonstrated efficacy in reducing fear of heights, flying, and public speaking, and a small number of controlled studies indicate it may be useful for treating post-traumatic stress disorder (PTSD). Although several studies compared VR therapy to no treatment, for certain types of fears, other studies indicate that VR and in vivo — or real life — exposure therapy are equally effective. Often, VR therapy is done with the supervision of a therapist, but some programs, like the ZeroPhobia app, are designed for people to use independently.

But how does it work if patients know that these experiences aren’t real? 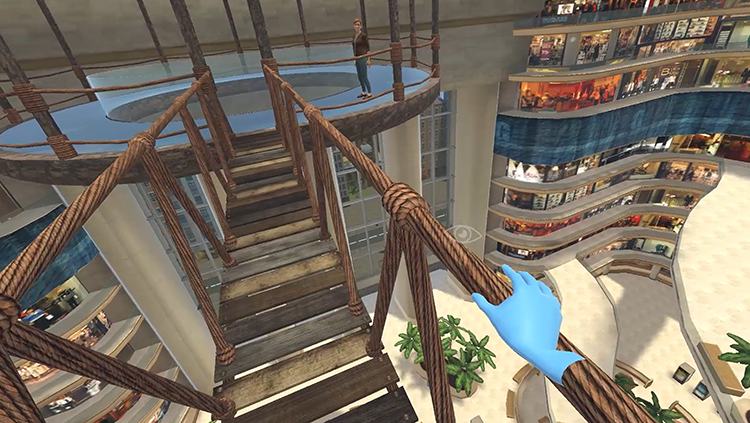 Oxford VR’s immerse therapy uses a computer-generated virtual coach to reduce the fear heights in patients. Pictured here is the virtual environment where a patient practices walking across a rope bridge at a high elevation.

In real-world exposure therapy for the fear of flying, you can’t control for turbulence, says Brenda Wiederhold, a clinical psychologist and co-founder of the Virtual Reality Medical Center in California. With VR exposure therapy, the psychologist’s prior awareness of what will happen in the scenario enables them to work collaboratively with their patients, so they aren’t given more than they’re ready to take on.

Freeman says he’s also interested in whether psychologists can, “use VR in ways that go beyond what you can do in normal therapy.” For example, instead of having a patient with a fear of heights merely look out over the edge of a balcony, as one might do in real life, patients in VR therapy could walk onto a high-up platform to complete a challenge like rescuing a virtual cat. Freeman says they want to make these programs not only therapeutically beneficial, but also fun and engaging for patients.

“… for whatever reason it still provokes all the anxieties that you feel when you’re doing things at heights.”

In other words, even when patients know the VR isn’t real, parts of the brain still respond as though it is. Albert “Skip” Rizzo, a psychologist at the University of Southern California’s Institute for Creative Technologies, notes that even though the frontal lobes of the brain (which deal with higher cognitive functions, like planning and problem-solving) tell us it’s just a simulation, the limbic system’s fight or flight response still reacts to the sensory information it gets from the simulation.

In many ways our brains and bodies respond to VR similarly to how they respond in the real world. When study participants traveled up the side of a building on an open platform elevator in virtual reality, they got sweaty, their hearts beat faster, and they reported feelings of stress and anxiety.

Nugent reports feeling this way herself during her VR treatment. “The VR world, when you look at it, doesn’t look like real life, but for whatever reason it still provokes all the anxieties that you feel when you’re doing things at heights,” she says.

While VR exposure therapy has advantages, it does have limitations. Both Wiederhold and Rizzo say VR therapy may not be suitable for people who are prone to motion sickness as some may experience cyber sickness from the visual stimulus of simulated motion — high levels of nausea, dizziness, disorientation, and eye strain.

In addition, VR therapies need to have some level of clinical oversight. Rizzo acknowledges this can be a somewhat difficult balance: on one hand, “we want to make treatment as accessible to people as possible,” he says. “But at this point I think it should always be under the guidance of a well-trained clinician when you’re talking about these kinds of mental health conditions.” He cautions people against self-diagnosis and self-treatment, pointing out that a person may think they have a fear of flying, when they may actually have generalized anxiety disorder or claustrophobia or PTSD.

“… point I think it should always be under the guidance of a well-trained clinician when you're talking about these kinds of mental health conditions.”

Wiederholdis also concerned that some of the commercially available apps allowing people to experience heights in VR have yet to be clinically validated and could do more harm than good. “I have unfortunately had patients come in and tell me about apps they’ve done for fear of heights,” she says. “And you’re looking down and if you walk a little bit too far, you fall on the ground and hear a loud thump. Now, that’s not going to help somebody with a fear of heights. It may, in fact, traumatize or re-traumatize the patient and they most likely would not continue treatment.” Weiderhold says   developers must involve clinicians in the creation of these apps.

Even though VR treatments aren’t perfect, they could be helpful. After her VR treatment, Nugent went to the top floor of a shopping center to face her fear in the real world. “I just got on the escalator without a second thought. Completely easily, completely fine. I was astounded,” she said. “All those fears just disappeared, just weren’t there. I was stunned.”